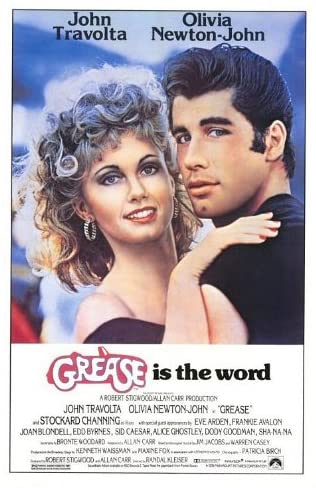 Grease is the word. And Converse, apparently, is the shoe. Grease (1978) is one of my favorite movie musical, probably my favorite before The Greatest Showman (2017) came out. John Travolta and Olivia Newton-John. You’re the One That I Want? Yeah, it doesn’t get much better than that. It’s one of those movies that you first watch it and was indifferent towards, then a song gets stuck in your head, and next thing you know you’re obsessed. It’s a great movie, and I like it, despite it getting worse every time I watch it because I’m getting wiser and recognizing all its flaws and problematic lines. Now it’s become more of a guilty pleasure.

I’ve always enjoyed watching it, singing along to the songs, and screaming at the screen whenever Danny and Sandy does something I know they’ll regret. But one time, I was screaming at something else. The blatant excessive display of Converse Chuck Taylors. I asked all my friends, but none of them seemed to notice or mind it. I did some research to see if Converse and the production of Grease had a little deal, but nothing came up. It probably wasn’t product placement, and Converse was just that popular back then that an entire movie decided to give it free publicity. Either way, it struck me, so I dug a little deeper to see how much free publicity has Converse had in movies all these decades. And the results did not disappoint me.